The showstopper challenge at Bake Off for Dessert Week was a bombe. The one that won Star Baker made a really nice bombe and, after chatting with my husband, we’ve decided to make something similar, a Foret Noir Bombe. This was a joint venture between me and my husband. So, it was fun to bake and it turned out amazing. I was so pleased with the mirror glaze and the decorations. 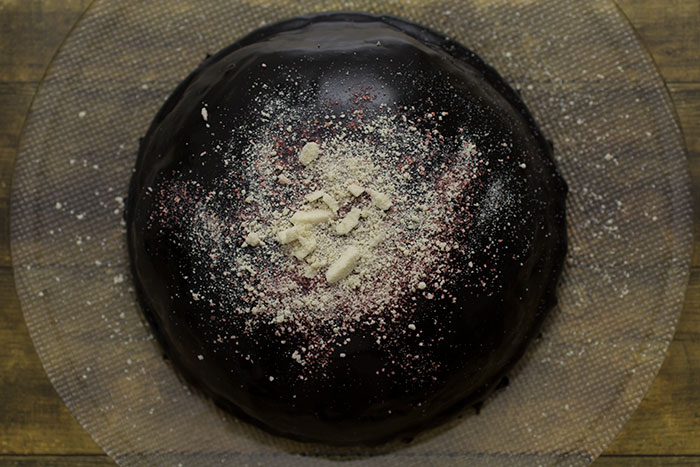 The Foret Noir Bombe is made with dark chocolate mousse, a middle of shop-bought chocolate curd, and a sponge brushed with cherry syrup and Rum. It is a spectacular cake, a real showstopper, but it is not as complicated to make as it might look.
For the mousse I used the Mousse recipe I shared before, see here. The only difference is that I’ve made it with soy milk instead of dairy milk.

Before making the mousse, line a round bowl with cling film. Make the mousse and pour it into the bowl. Put the bowl in the fridge and leave it to set. While the mousse is setting, make the sponge.

Beat the egg whites until they become stiff. In another bowl, beat the yolks with the sugar until it gets pale. Add the flour and beat until is incorporated. Fold in a scoop of the egg whites to soften it. After that, fold the rest of the egg whites mixture into the egg yolk mixture, gently, to keep the air bubbles in.

Heat the oven to 200C or 180C for fan ovens. Bake the sponge for 20 minutes. To test it press it with your finger. It should bounce back.
Take it out from the oven and let it cool down on a wire rack.

Once the mousse is set, scoop out some mouse from the centre to leave a hole. Fill the bombe with the chocolate curd. Press with the spoon, to make sure that there are no air pockets in the curd. Spread a bit of curd evenly on the mouse so the sponge will stick to easier.

Brush sponge with the syrup. If you think it’s too much syrup drink the rest (that’s my husband’s contribution to the recipe, but I fully agree with him). Place the sponge upside-down on the mousse.

Refrigerate the Foret Noire bombe. I left mine a couple of hours. Take if out of the fridge and flip it on a wire rack. Now it’s ready for the mirror glaze.

Mix the cocoa with the sugar, agar-agar, and a little bit of milk in a pan. Once there are no clumps add the food colouring and the rest of the milk. Place the on the hob on high heat. Bring it to boil mixing it from time to time so it doesn’t catch the bottom of the pan.

Once it started boiling remove it from the hob and leave it to cool down a little, mixing it from time to time.
Once it cools down it will start thickening. When it gets to the consistency of a thick honey pour it over the bombe, making sure it covers it nicely. Put a tray underneath the rack to collect the excess.

Leave the bombe on the rack and put it back in the fridge. Leave it a couple of hours for the glaze to set properly. It’s a thin layer so it will set quickly. Now you can transfer the bombe to a serving plate and sprinkle the white chocolate on top.

The Foret Noire bombe is ready to be served. Enjoy! 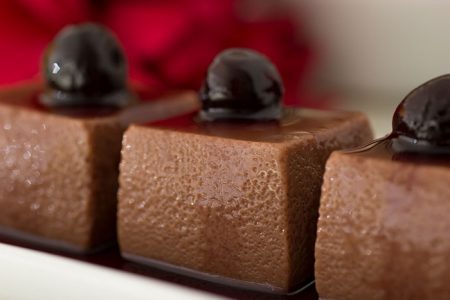 The book I started reading today is a fun account