Lussekatt are Swedish buns, made with saffron and raisins. They are a bit special, as in Scandinavia, St. Lucia Day is celebrated on the 13th of December, and on that day people enjoy these delicious Lussekatt buns. These religious celebrations involve a procession of girls dressed in white robes with red sashes. The girls have wreaths of candles on their heads, lighting the way through the darkness of winter. It is in honour of St. Lucia. She was martyred in the Roman times because she used to bring food to the persecuted Christians in Rome. She had candles on her head, to see in the catacombs while carrying food with both hands, hence the tradition I mentioned earlier, of girls having candles on their heads. Lucia means light, that is very appropriate for this story.

This day is celebrated on the 13th December because that is the day of the solstice by the old calendar. This Christian festival includes pagan festivities that would have taken place on the day, like bonfires. For pagans this solstice marked the festival of lights. Well, is hardly the first Christian holiday inspired by pagan practices. If you are curious about what else they eat in Sweden for Christmas, you can have a look at Janssons frestelse, something I’ve made six months ago. It’s a delicious dish and quite different.

These buns are made with saffron, to give them their special sunny colour. Of course, a cheaper version would be to add a bit of yellow food colouring. But the saffron also gives them a lovely flavour. I did enjoyed them a lot, the texture is really great, and the saffron adds a bit of luxury to them. To make Lussekatt, I would recommend using a stand mixer, mainly because the dough is very wet and it’s very hard to knead by hand.

Start by putting the saffron strands in a pestle and mortar. Add a spoon of milk and stir. Leave the saffron to soak for about 10 minutes. Meanwhile, weight in the other ingredients. In the bowl of the stand mixer, put the flour. Make a well on a side and add the salt, cover with flour. After that, make another well in the middle of the flour, add the yeast and the sugar.

In a bowl, put the butter and melt it in the microwave. You can melt it in a pan if you prefer. After the butter has melted, pour the cold milk on top to bring the temperature down. Beat the egg in another bowl. Pour the saffron with the milk over the yeast. Continue by pouring the milk and the beaten egg. Start the mixer to knead. Knead for about 7-8 minutes.

Tip the dough onto a floured worktop and make it into a ball. Spray some oil in the bowl and put the dough back for it to rise. Cover the bowl with a lid or cling film and leave the dough to rise for an hour. Meanwhile, soak the raisins in a bit of water, milk, or Rum. I’ve soaked them in milk.

After the dough has risen. Tip the dough onto the floured worktop. Weight in the dough and divide it in 10 equal parts. Make strands of dough equal in size. Shape the bun into a tight S. Place the buns on a baking tray lined with baking paper.

Leave the buns to rise for another 25 minutes. While the Lussekatt are rising, heat the oven at 190C or 170C for convection ovens. Brush the buns with egg white. Place two raisins on each bun like you can see in the pictures. Put the baking tray in the oven and leave to bake for 15 minutes. If you are not using a fan oven, turn the buns after 12 minutes, so they cook evenly.

If you are a Swedish reader, I wish you “God Jul!” 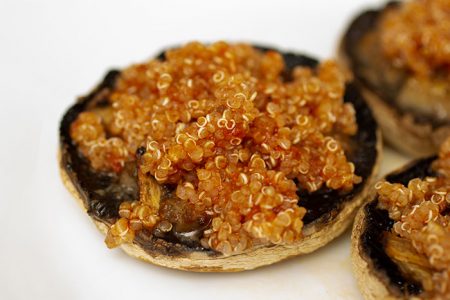